MY FIRST MEMORIES OF KNIFEMAKING GO BACK TO MY CHILDHOOD IN THE 1970'S.

When my parents worked side by side in their fourth floor workshop within Stag Works here in Sheffield. I spent many an hour there after school and at weekends, just trying to keep out of trouble.

In 1980 when I was 10, my father picked me up from school and took me across town to show me a new workshop, the family business, Pat Mitchell (Cutlers), which was named after my mum, was moving, not too far, which was just as well as the machinery was moved on barrows. A friend of my dad had just bought a place called Portland Works and we were set to get a workshop in there, dropping a few flights of stairs too, first floor this time, we were going down in the world.

Although my memories go back to Stag Works, being part of the move and then the fresh surroundings triggered something in me and I felt more of a part of the family business. I earned pocket money on a Saturday morning by 'knocking on' work for my dad to haft and finish the following week; knocking on being fitting the handles and hafting is shaping them. My apprenticeship at my father's knee had started without me even knowing it, I often wonder if he did?

I started my full time employment with my mum and dad at the age of 15, straight into the trade. There was much to learn but thinking back now I was learning each aspect of the trade from forging through grinding and finishing, each section that historically different pairs of hands would have undertaken. I suppose it is testament to my father's teaching skills that I didn't even realise it at the the time. I learned a great deal but don't really ever remember him teaching me a thing.

So that was me - family in the cutlery trade and I was brought up in it. I did not know what a custom knife was or how good the rest of the world was becoming. I was a young man from Sheffield, we were still the best in the world weren't we? How wrong could you be?

The majority of what we were worked on back then was 'cutlery trade wares', I say worked on because of course we were not wholly making them, the blades were mostly made elsewhere. These were the products that all the 'Little Mester' type outworkers were charged with, Butchers' knives, scrapers, the leather and stag Bowie type knives that we all had as kids. Change was on the way though and we, my dad and I, designed a range of outdoor knives and branded and marketed as our own - we called them 'Benchmade' knives, It wasn't the done thing back then for outworkers such as us to have our own name on the product. I am sure thinking back now that must have raised a few hackles.

What I now call Custom knives were unknown to me, but these Benchmade knives were a sure step on the way. They were not perfect, we were still of the Sheffield way of things, these knives were about getting good quality hand-made knives to the masses, which was always my dad's ethos. The customers were mainly the hands that used them in the field, as a result they were offered through Game and Country Fairs direct to the user, the odd gun shop too, they were great value for money.

For my parents the Game Fairs were as much about the craic as anything, sales were never tremendous but the fairs are an important part of this story because there I saw other knife makers, not many and always the same ones, but I remember looking at their knives and seeing something different. I now know exactly what that difference was - the standards, what we today call the fit and the finish. A couple of these makers had already started their journeys towards creating as perfect a knife as they could, this is when the grip of the Sheffield trap began to weaken, I use the word trap there in the nicest possible way of course.

Fast forward a few years and we lost my dad, after a lot of thought I decided to carry on with the business. Full of the confidence of a younger man I thought, I can build this business up, make it bigger. The Benchmade knives were kicked into touch, being very time consuming and maybe stuck in the middle ground between cheap and not so, never good earning work. I virtually stopped making knives and concentrated on blade work, Scimitar and Khunja blades through London Jewellers and bound for the Middle East, all manner of blades for Wilkinson Sword, Dirks, Swords and Commando, Sgian blades by the thousand and stamped Glasgow, Scotland and eventually being shipped all over the world, we were very busy and five strong in the workshop at that time.

By 2004 I was office bound half of the time and found myself taking on work I didn't want just to keep the other four pairs of hands busy, a wage bill is a frightening thing. I eventually realised that although around knives and blades, which I loved, this genre of work was not where I wanted to be, I was sick of the sight of sharp and shiny things yet I thought back to those Benchmade knives.

I downsized over a period of time and the lads moved on to other things until eventually I locked the doors to Pat Mitchell (Cutlers), the workshop was mothballed with no plans to reopen. I left knifemaking for a while and did other things, they didn't work out and I inevitably found myself back in my motionless workshop. It was quiet, there was no work to do, no customers, I needed both.

What I had now though was one of the most important and powerful tools my workshop has ever seen, the internet, my window to the world. Using the web I looked around and saw the standards the hand made knife world was now working to and I saw that while I had been supplying the Arabs with their sword blades, things had romped on. I looked at the US and SA custom makers and saw work of a jaw dropping standard, again I'll refer to it as fit and finish, some of the standards were truly amazing, inspiring. And that is exactly what it did for me, it inspired me, it showed me precisely where I wanted to be in the world market place.

The Benchmade knives came back to mind. I foraged around the workshop and found the materials to make one, then what, sell it to who? I did what we are all doing now, I used my new found tool and of course eBay was a viable option. I listed the knife and it sold, so I made another, same again. From that moment in time the Benchmade began to evolve, my father had surely set the skills into place, and I am a firm believer that my grounding in the trade gives me an edge. Those skills did need a hone, to bring them up to modern day and worldwide standards, but I did know what I wanted to do with them. I wanted to learn more and add to them, I still do, I want to be the best maker of knives I can possibly be.

What is really nice is that I am still in that Portland Works workshop today, from it a short flight of fire escape steps leads me to a flat roof, from that roof I can still see the rooftops of that Stag Works workshop where it all started for me. 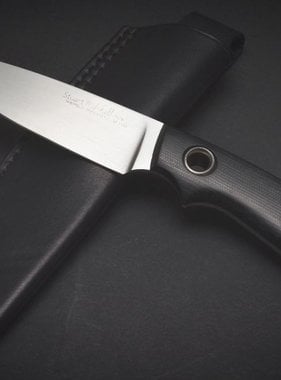